If you are a dementia caregiver, it is important for you to adjust your home in a way that makes life comfortable for your loved one. Here are a few expert tips from Ar. Tania Phillips AIA who has been creating uplifting spaces in stress-ridden environments for senior living.

The decision to move out of home into an institution on account of an illness like dementia is a difficult one. There comes a time when professional care is unavoidable. However, until that point comes, there are changes that can be made in the home environment that will make it safer and more supportive for individuals and their caregivers dealing with dementia. The unfortunate eventuality of someone predisposed with dementia will need special attention. Furthermore, he or she may choose to never leave home. More often than not in this country, we hear of someone with dementia having wandered off away from their home and never returned.

As medicine advances the average life expectancy will go beyond 70. We will start to see more cases of people with early onset of dementia in this country. Our home environments will need to adapt to accommodate a family member who copes with dementia and help them not just survive but thrive. The greatest challenge is to design our homes or space to be adaptable to someone that may develop dementia allowing for the same home to be otherwise occupied by an active able adult.

According to a study published in Neurology India, the World Health Organization (WHO) predicts that by 2025, about 75% of the estimated 1.2 billion people aged 60 years and older will reside in developing countries. It is estimated that the number of people living with dementia will almost double every 20 years to 42.3 million in 2020 and 81.1 million in 2040. The rate of growth will be the highest (around 336%) in India, China, South Asia, and western Pacific regions, 235-393% in Latin America and Africa, and the lowest (100%) in developed regions. Based on the 2001 global population, about 24.3 million have dementia and 4.6 million incident or new cases are added yearly.

The common forms of dementia are likely caused by a combination of genetic and environmental factors. According to the NIH, dementia is the loss of cognitive functioning; thinking, remembering, reasoning and behavioral abilities to such an extent that it interferes with a person’s daily life and activities. These functions include memory, language skills, visual perception, problem-solving, self-management and the ability to focus and pay attention. Dementia ranges in severity from the mildest stage, when it is just beginning to affect a person’s functioning, to the most severe stage, when the person must depend completely on others for basic activities of living.

Alzheimer’s disease is one of the more common types of dementia. Alzheimer’s disease gets worse with time. It is a progressive disease that has stages leading to death. The Alzheimer’s Association notes that Alzheimer’s disease is the sixth leading cause of death in the United States. It also points out that out of the top ten causes of death, it’s the only one without an effective treatment or cure. Some of the most challenging effects of Alzheimer’s disease is the progressive deterioration of the brain and the behavioral changes that come about because of this. According to the Alzheimer’s Association of America, in the early stages of the disease people experience irritability, anxiety and depression. As the disease progresses people may experience other symptoms like anger, aggression, agitation, physical or verbal outbursts, general emotional distress, restlessness and wandering, hallucinations, delusions and sleep issues.

Until recently, persons with dementia that could not be cared for at home were often put into locked units in an institution. Over the last three decades new residential models for care have been developed and carefully studied. These new homelike models have not only been well received by patients and their families, but also the individuals with dementia have been able to live safer and healthier in a less restrained environment. Many of the lessons learned in these new models can be applied to private homes.

Tips on safe designing of homes for those with dementia

There are several design considerations to be considered in a home environment of someone coping with dementia. The symptoms of dementia often lead to disorientation, which may lead to wandering. They are either looking for someone or something, wandering in fear or under stress when confronted with an unfamiliar environment or sound, boredom or simply habituated into a past life of routine. Allowing for controlled wandering within the home is important. A continuous path connecting rooms with doorways that will bring the person back to the starting point will minimize the frustration that may come about when confronted with dead-ends.

When wandering around becomes wandering away, older adults with dementia are at high risk of injury. The front door needs to be tucked away and concealed, without any windows so that he or she may not feel the urge to leave the secure home environment. Additionally door hardware should be selected to match the color of the door so that there is very little attention drawn to it. Doors should be locked with a deadbolt. If there is a vestibule at the front door it should have dimmable lights to discourage the resident from entering into this area. Keys should be locked away, particularly car keys.

In the design of the kitchen, it is important to restrict access to certain equipment that may cause harm to the resident with dementia. This can be resolved with sensor-controlled equipment that shuts off when the resident is in close proximity connected with an RFID system. An open kitchen central to the home, helps the caregiver keep a watchful eye on the spouse or parent at all times even while preparing meals for them. 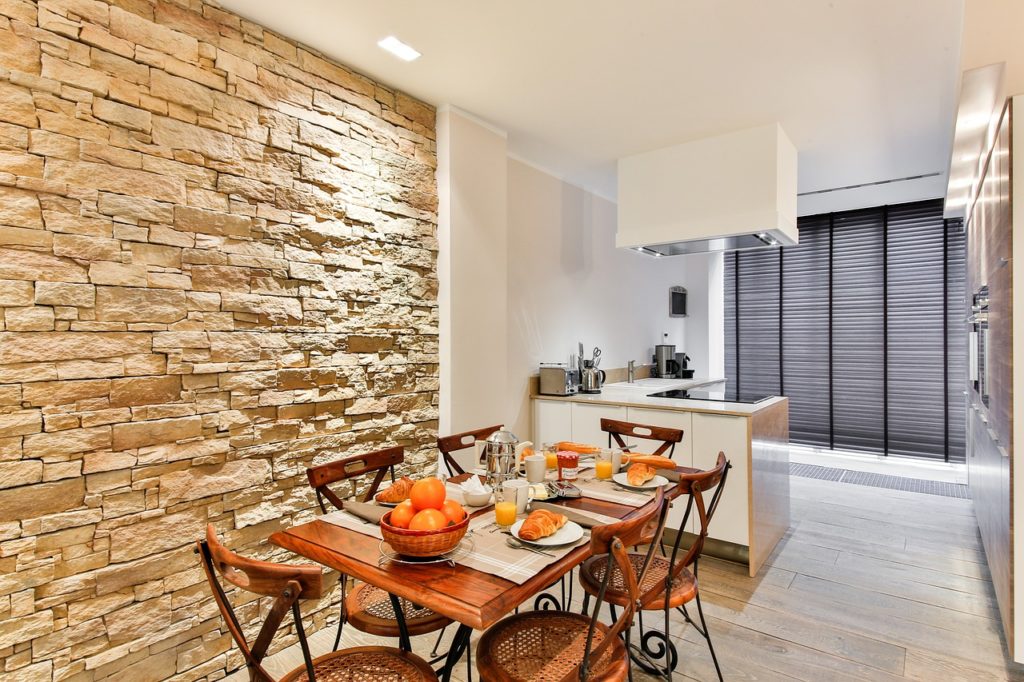 Within the home somewhere central, there should be a designated space for activities to keep the resident mentally active. A breakfast table is a good place for this. He or she could be seated at this table while the caregiver is preparing something in the kitchen with a visual connection to the table. Views to an outdoor garden will encourage him or her to spend more time in this area. There should be ample space for wheelchair movement around the table. The flooring should be slip-resistant to minimize the risk of slips and falls. Vinyl flooring will minimize the impact of a fall.

The home needs to accommodate all Activities of Daily Living. These are activities performed by an individual on a daily basis necessary for independent living, which includes bathing, showering, dressing, eating, maintaining continence, transferring and mobility. Bathrooms in particular need to be fully accessible to allow for easy wheelchair maneuvering inside the bathroom and to have enough room for the resident to transfer from the wheelchair onto the toilet. The toilet needs to be located across from the toilet door and directly visible from the patient’s bed area, as a visual aid for someone with incontinence. Lighting cues like wall mounted night lights just outside the toilet, aid in providing direction to the resident that needs to use the toilet after dark. Medication should not be left accessible, it should be stored away in a lockable space.

Noise and reverberations can cause anxiety and confusion to someone with dementia. Reverberation control in a space like a bathroom can help calm the person down. Moisture resistant acoustical ceiling in the bathroom help reduce the reverberation effect of unpleasant sounds like that of the exhaust fan and also help maintain a calmer bath environment.

A bedroom is a significant place for a person with dementia as it is often the only defensible personal space the resident has access to. In this personal space, the person with dementia needs to be able to adjust their television or radio to a level where they can hear it comfortably. As many older people with dementia also suffer from hearing loss, this means that the noise level within the bedroom can be disturbingly high. Adequate sound attenuation should be provided to the walls and the doors of the bedroom to minimize noise transfer to others in the household. For severe or late-stage residents with dementia, it is helpful to equip this room with sensory stimuli such as pleasant aromas, tactile surfaces and music which can be used to create physical and emotional connections. A porthole window into the residents sleep area is essential to stay connected with him or her while they are at rest.

RFID technology is extremely useful in a home setting. The resident could wear a bracelet or a pendant connected to the lights and electronic equipment that could be programmed to either switch on or off depending on the need. For example, the kitchen equipment that could cause harm can be programmed to switch off when the resident is near, while a bathroom light could be programmed to turn on as they approach. Conversely, the light to the front door vestibule could switch off when they approach. Someone with dementia will be discouraged from entering an area that is dark and without light.

Over time the senior care model has shifted from the home to the institution like environment and now back to the home-like environment. The design for dementia has endless possibilities when overlaid over a single-family home or flat. The attributes of this design can be applied to a flat that is marketable to a larger market. A home adapted for someone to age in place becomes a familiar environment that responds to the couple’s physical and cognitive decline, allowing them to thrive without being relocated. This seamless experience provides them with a sense of hopefulness and dignity as they age.

Whether we choose to move into an institution or stay home while we are cared for, in the interest of the health and safety of the resident with dementia, the home environment should be adaptable to allow us all to age in place even if it is only an interim solution.

Want to know more about what else could be done to make your home dementia-friendly? Click here to read.

Ar. Tania Phillips AIA has over 15 years of international expertise in the planning and design of specialized practice areas like Senior Living & Healthcare. With an education in Health Systems Planning and Design, Ar. Tania has found ‘Senior Living’ as her forte, creating uplifting spaces in stress-ridden environments that support local cultures with international standards.