Navigate:
YOU ARE AT:
Silver Talkies»Community»From Our Readers»Elephant On Our Minds – Camping With The Grandkids

Elephant On Our Minds – Camping With The Grandkids

It was an adventure alright and an encounter that almost happened. Our writer went camping with the grandkids and shares her story about the elephant they almost met.

At large. Out in the open. Sleeping in a tent.

In spite of my adventurous streak, I have never done it before. Slept in a tent, out in the open in the midst of trees.
I could not resist when my daughter Meghna asked me to come along to stay one night at her ‘farm,’ where a two-room structure is under construction for the last six months. The place is Denkanikotta, on the Karnataka, Tamil Nadu border.

Ma are you okay sleeping in a tent?

Sure — you guys are also going to be there, right? What about the floor? Will we be sleeping on the hard ground?

Ok, we will carry the extra thick mattress for you.

That should be a relief.

So, we set off. The grandkids and their nanny, Lakshmi, in the rear seat, me next to the driver and my daughter in the driver’s seat. The rear of the Scorpio was piled high with food, mattresses, chatais, water supply for the next 24 hours, among other things.

The farm is barely 45 km out of Bangalore. Soon we came to a little market where we picked up some fruits and some curry and rice for the caretaker. We reached in an hour’s time. The kids were thrilled as they wanted to see the cow and its baby. The calf was born on their previous week’s trip – they were still looking for a name and arguing vociferously about it.

“Nani, you know the mama cow was making so much noise. And then the baby cow just fell out like pop!”

Unfortunately for little Tasmayee (all of three and a half!) the ‘baby’ cow was not a small baby any more. She was so excited about it. She did not want to venture anywhere close to it. Only when Meghna came and gathered her in her lap would she touch the calf.

Then there was the swing where one could swing for as long as one wanted. 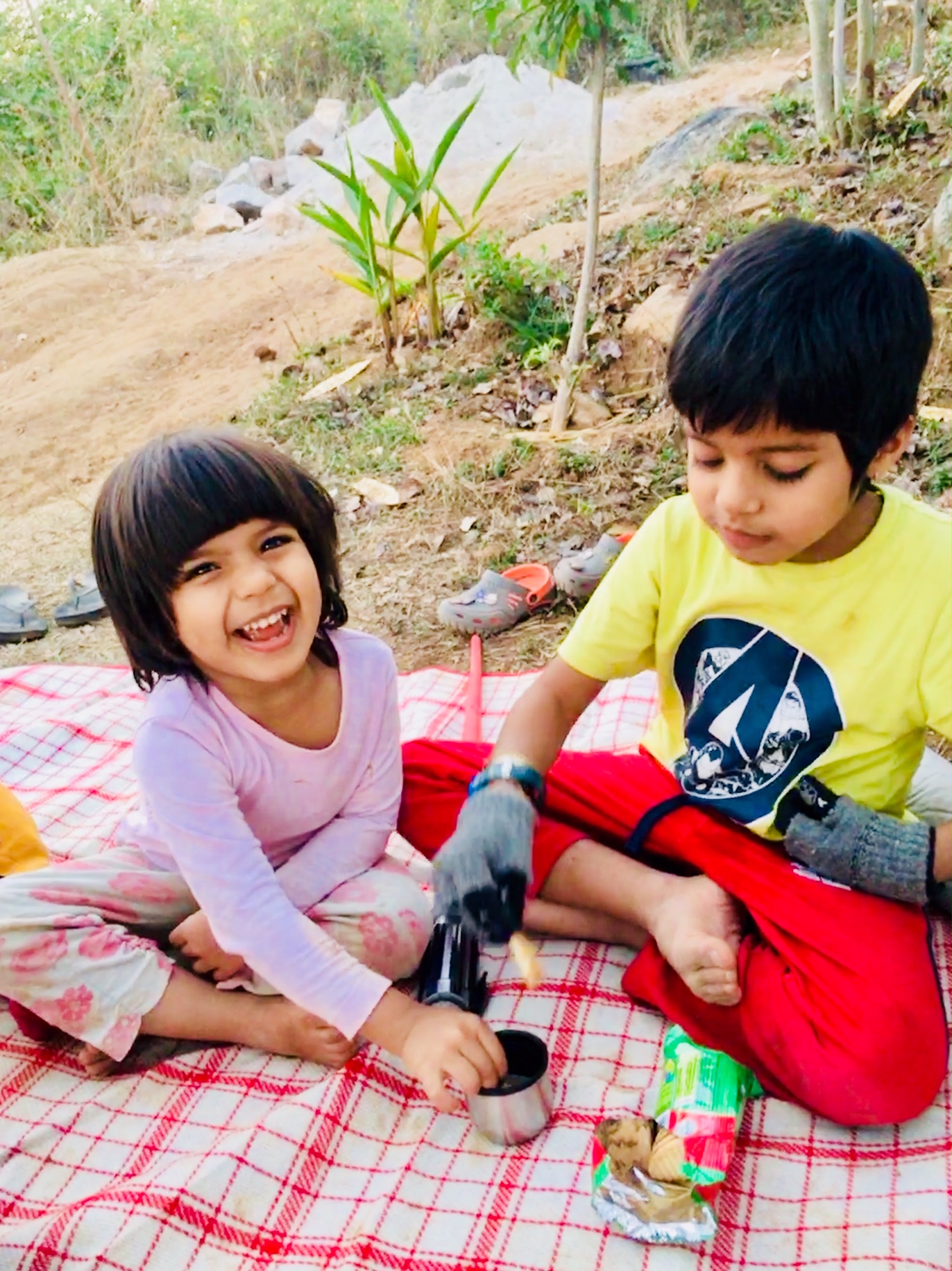 Brunch was laid out and while we tucked into the yummy stuff, Illaiah, the caretaker, came along and gave us the bombshell. In his rapid-fire Kannada and the broken English that Lakshmi translated, we gathered that an elephant had been in the premises last night.

An elephant? Are you sure? Meghna made him repeat his statement. He was quite sure and wanted us to go across and see the place where the perimeter fence had been broken and the elephant had entered.

Now obviously Meghna was worried – she had her old mother and she had her two kids. What if the elephant decided to come back? The what-ifs carried on…

Shall we go back? I asked tentatively.
No, ma, she said, we shall be okay.

Now if Mayur (her husband) had known he would never have allowed us to come – that is for sure!

The walk around the perimeter took us a while and then we walked around the rooms under construction. The kids loved the piled-up sand and happily played there, while Meghna spoke to the mason. Shivaye was probably some superhero in his head because he had his superman cape on and carried a thick stick to help him climb the ‘mountain’ of sand. I could make out that he was saying things to himself. Tasmayee was the queen of the realm, sitting on the pile of sand and dreaming!

Back to the shelter, where the kids promptly waded into the pool —– no fancy swimming pool this — just a brick-lined pond, six feet square and six feet deep with leaves and twigs floating on it. The kids loved it— the sun was blazing hot while the water was cool.

After another yummy lunch, we did some artwork. By then the sun was setting and Meghna and Lakshmi set about fixing up the tents for the night. A compact roll about 16 inches long unfolded into a tent to sleep two people. Lakshmi has also learnt the fine art of hammering down the stakes into the hard-rocky soil, one at a time. I watched fascinated as I saw these two girls set up the two tents. I was sharing a tent with Lakshmi and my super thick, well-padded mattress was laid out for me.

The author at the farm

While I was watching all these activities, that primaeval fear of the wild elephant had not really gone away.

What if the tusker decides to come back and finds us mere mortals in its way? The kids were happy playing and both these wonderful girls were figuring out ways and means of keeping all of us secure. Illaiah was asked to get one more hurricane lamp from his home and it was designated for the tree between the two tents so that the light would keep the animal off.
Then Illaiah and his wife Ellama decided to get some dried logs and start a bonfire. We sat around it and had our dinner. I cannot recall what I ate as I was rather preoccupied with the thought of ‘what if….’

But I dare not voice my fear because if I did, I knew it would reverberate with the little ones. Fear has an insidious way of hovering around us. I also recalled what my late husband told me when we were flying into Baghdad where the Iranian missiles were landing every day, “If a missile/bullet has your name on it, it will find you, wherever you are!’ So, if my friend, the tusker had my name imprinted on his tiny brain, it would find me. So why lose my sleep over it?

Before we shut down for the night, I sat up on my bed and recited my 108 names for Lord Ganesha, the elephant-headed God. It is a part of my daily morning ritual. My prayer felt real and I had the comfort of knowing that my loved ones and I were protected. The lamp went up on the tree while the log burnt slowly. I woke up a couple of times and through the net pane on the roof of the tent, saw the stars in the clear sky. The moon was also up and there was the blessed silence of the deep forest with an occasional cricket calling out. I slept soundly and woke when the eastern sky started glowing pink in the pre-dawn glory.

I lazed around in the bed and watched the sky turning lighter. Since everyone was still asleep, I sat on the solitary camp chair and watched the day break in all its glory. We got back to the city by the afternoon.

The next day, in the evening, we got a call from the caretaker.

The elephant had returned the night before (i.e., on the day we left). It had thrown over the empty water drums and gone away the same way. What was he looking for?

All other images courtesy: Shyamola Khanna

Shyamola Khanna is a freelance writer and a trainer of soft skills, based in Hyderabad. She is a published author and her first book, 'The COW in Kargyll' was well received. In case you are wondering - COW is an acronym for the Commanding Officer's Wife! While she awaits the release of her second book she continues to paint and indulge in photography.