Navigate:
YOU ARE AT:
Silver Talkies»Inspiration of the Day»Pride Month Special: How I Learnt To Accept My Son’s Sexuality

Pride Month Special: How I Learnt To Accept My Son’s Sexuality

According to figures submitted by the Government of India to the Supreme Court in 2012, there are about 2.5 million gay people recorded in India. The number is possibly higher, given the fact that social ostracisation and homophobia ensure that many LGBTQ+ people may not be out of the closet. What remains very important is support from parents of LGBTQ+ children, which unfortunately for many in our country, is hard to come by. We speak to one such awesome parent, Aruna Desai and her journey of acceptance.

My name is Aruna Desai. I am 55 years old. I work in human resources and live in Mumbai. I grew up in a middle-class family in Mumbai, got married at the age of 24, and had a son, my only child, Abhishek when I was 27. When I was 43, my son told me he is gay – he was 17 then. At that time, I had very little idea about what homosexuality was.

Perhaps sensing this, Abhishek and his close friend started preparing me for receiving the news. They made up a story about an imaginary friend who had been thrown out of the house by his parents because he was gay and because the parents couldn’t accept this news. Then they told me that their friend was suffering a lot – he was out on the streets, he had no food and was terribly lonely. I was touched by this story and began to educate myself about homosexuality. Thus began my journey into my son’s world.

I still remember when he came out to me. It was 3 December 2007 and he had been crying since morning. It was clear he wanted to tell me something but couldn’t bring up the courage to do so. He was miserable and I was sad to see him so desperate. Finally, sometime in the evening, the realisation struck me and I remembered the story about his friend – the one who had been thrown out by his family because of his sexuality. And I wondered if what he wanted to tell me was along these lines. So I just decided to ask him “Are you gay?” To which Abhishek responded, “Mamma, do you hate me now? Will you accept me?” At that moment, I might not have fully understood what this would mean to my life moving forward, what would it mean to be a mother of a gay child, but I knew one thing for sure, he was my child, and that I loved him. I remained calm and took him out for dinner and told him I loved him regardless.

After this, my journey as a parent of a gay child began. I started reading up online, and Abhishek also gave me a book to help me understand in a better way what being LGBTQ meant. After a couple of initial doubts and queries, I was eventually fine with it. He then took me to a parents meet organized by a support group Gay Bombay. Interacting with other parents and LGBTQ children helped me a lot.

Abhishek is my child. We need to accept our children for who they are. Also, in the first place, what is there to accept? He is already my son. Homosexuality is not a disease. It’s a natural orientation. People should be allowed to love who they love. It is really as simple as that. I can’t imagine how parents can throw children out of their homes when they discover they aren’t heterosexual. I’m really shocked to learn that someone can be so cruel to their own children.

Being gay in India is not easy. To be gay in India without your parents’ backing and support, can make your life one of ridicule and exclusion.

I am first a parent and a mother, and then the mother of a gay child. Children are children. They don’t come with tags. Society puts these tags on them. But I would never let anything change between my son and me. How can I stop loving him if he decides to love a man? That’s not how parenting works. That’s not how mothers and fathers should think. I love his friends and everyone else he loves. His world is an extension of him. My son is an adult. He will define who he wishes to call ‘family’. I am a part of that family for sure and so is my husband. His friends and family have accepted him gracefully. 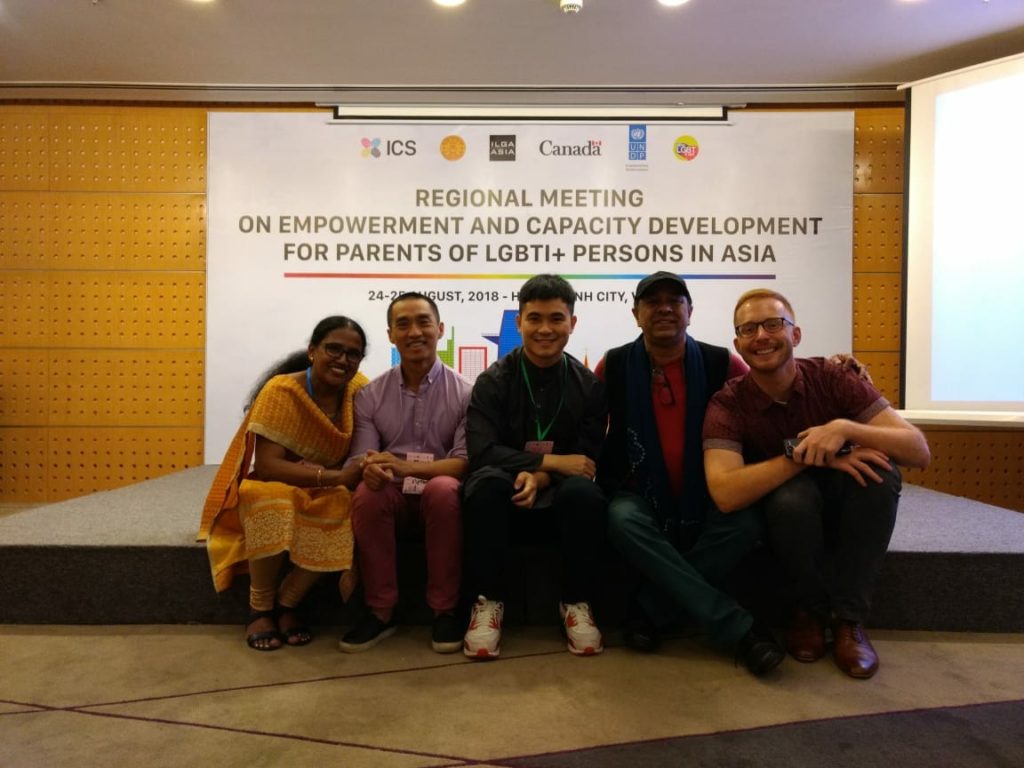 Aruna (extreme left, in yellow) at a conference for empowerment for parents of LGBTQI+ persons

I think Abhishek was fine with his sexuality before telling me and was not ashamed. Since I am very close to him, he wanted to tell me himself instead of me finding out from elsewhere. Me accepting him definitely gave him more confidence to go out and just be himself. This was before the Section 377 verdict (On September 6, 2018, the Supreme Court of India struck down Section 377, a colonial law that criminalized homosexuality.), so for him it was also the fact that if someone bullied or blackmailed him about being gay, or he ran into some sort of trouble; or if someone threatened to tell his family about him being gay, he did not have to worry, as his mother already knew that he was gay and he had  full support of his family. I’m happy we could provide him with that.

Aruna Desai is one of the founding members of Sweekar –  The Rainbow Parents, a support group for parents of LGBTQ+ community members. Watch this space to read how the group has been a source of support and information for the LGBTQ and their families here.