Navigate:
YOU ARE AT:
Silver Talkies»Community»People and Passion»The Pathbreakers: “Theatre Has Been The Healer And My Anchor During My Sunset Years”, Says Arundhati Nag

The Pathbreakers: “Theatre Has Been The Healer And My Anchor During My Sunset Years”, Says Arundhati Nag

On Jan 15, 2020 By Sreemoyee Chatterjee
Community People and Passion
A- A+

As part of our #Pathbreakers series, this is the story of  Arundhati Nag, a veteran actor and the driving force behind Bengaluru’s state-of-the-art theatre space, Rangashankara.

Seven years ago, in 2012, actor Arundhati Nag was about to appear on stage in Mumbai after 30 years in late Girish Karnad’s play Bikhre Bimb when she suffered from memory lapses and started skipping words as her thyroid collapsed due to severe bronchitis and pneumonic attack.

“If I wanted to say, ‘please come here’, I would say ‘please here’ and the word come would fade in my mind,” says Nag, who faced a clinical condition that would be every actor’s nightmare and went on to overcome it with sheer willpower and give what she considers her best performance to date.

It’s the same willpower that has seen Nag, about to turn 64 this year, realise her late husband’s unfulfilled dream and be the driving force behind Rangashankara, Bengaluru’s state-of-the-art theatre space that completed 15 successful years in October, 2019. You may have seen her outstanding performance in Hindi films like Dil Se and Paa for which she won the National Film Award for Best Supporting Actress. 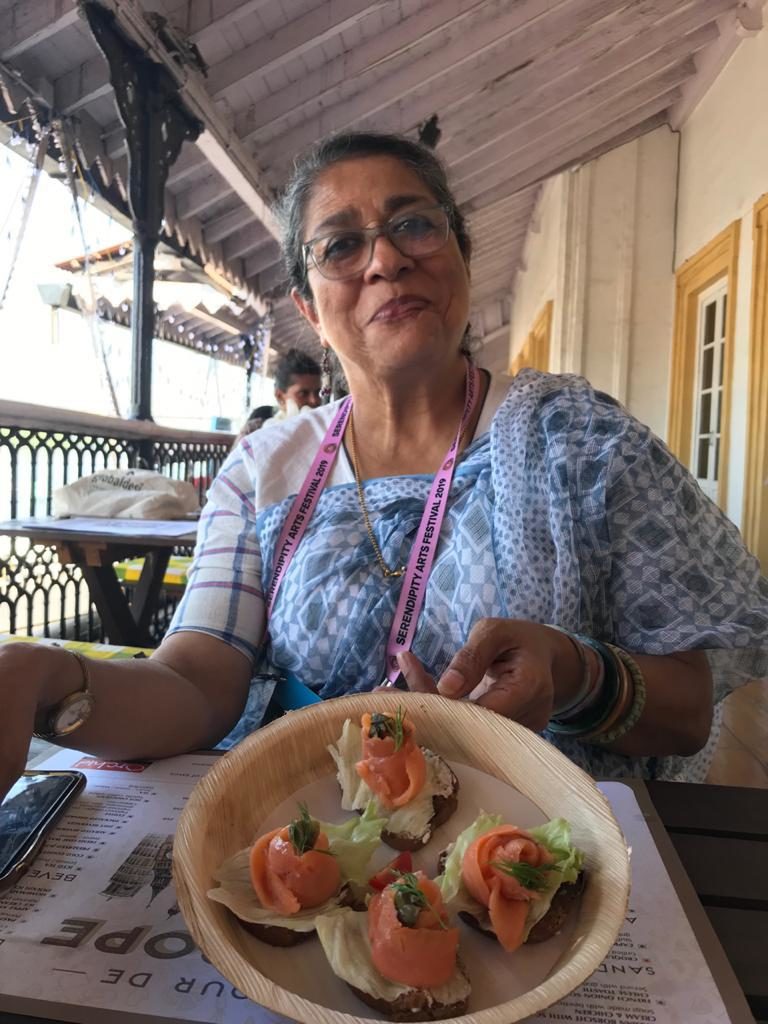 A doting grandmom to a toddler, an awesome cook and an epitome of charisma and humbleness, Nag shared with Silver Talkies how theatre has been her all-time anchor and the key to healthy, active and fulfilling ageing.

What does theatre mean for you? What has it been to you during your silver years?

Theatre is my lifeline. I would suggest everyone to find out what is that main artery that keeps you ticking in your life. Whether it is watching a sunset or cleaning your toilet or planting a tree or watching a play. There has to be the one something in your life that makes you tick. Theatre has been my survival kit.

It is the only thing I wanted to do and want to do now. It started when I was 16 and is still going strong. I have given it all of myself very truthfully and it has given back to me 100 times more. I really believe if one is able to unconditionally shower attention to one thing in life, other than what one does to earn money and live, that thing will define one in his or her sunset years. Once everything is done like raising children, losing spouses or getting a new one, there should be one thing that needs to be your anchor. Your children or your partner or any other human being shouldn’t be your only anchor. It has to be an activity, an idea and a thought and for me, theatre is that anchor.

Can you recall your first on-stage performance?

My first onstage performance happened in a government colony in Delhi. My father was working for the government and I remember doing a Rajasthani dance where I was playing a boy. My first exposure to drama was seeing Ramleela in the backyard of my father’s government housing colony where a Sardarji was playing Sita. These are the lasting impressions in one’s life and that’s why parents must make it a point for their children to watch real-life art like theatre, jatra, folk theatre, dance, folk dance, not just the classical form.

We are making a huge mistake by just going the Disney way when we have our own Pattachitra or Phad painting which will just disappear if we do not collect them. If we do not watch theatre, it will fade away. If people don’t buy a Phad painting or a Pichwai, they will become extinct. Each of these arts are infused with meaning and our next generation must be able to understand the meaning.

How did Rangashankara begin? What have you learnt from its 15-year-long journey?

I have worked in Marathi and Gujrati commercial theatres, IPTA, Hindi theatres and doing Kannada theatre in Karnataka for 40 years. Rangashankara is the crystallisation of a life well led and it is a logical end to a very good life lived in theatre. It has taught me how does one bring the essence of everything that one has learned and tries to put it in a space and make it available for generations to come. I do not see myself as the owner but am just serving the space.

Rangashankara happened because there was a need. At that time there was no small theatre in Bangalore apart from Ravindra Kalakshetra and one Chowdiah Memorial Hall which were 1000 seat auditoriums and not dedicated only to theatre. Also, I had come fresh from the experience of having watched Jennifer Kapoor build Prithvi Theatre, so the conviction was there. It was not all encouragement and a lot of discouragement as well. Moreover, it was the time of recession in the world and nobody was giving money. But I kept singing the same song again and again and the last year we completed 15 years. And celebrating Rangashankara’s 15 years we will bring you one good piece of theatre every month in whichever language that the audiences and theatre lovers can enjoy. 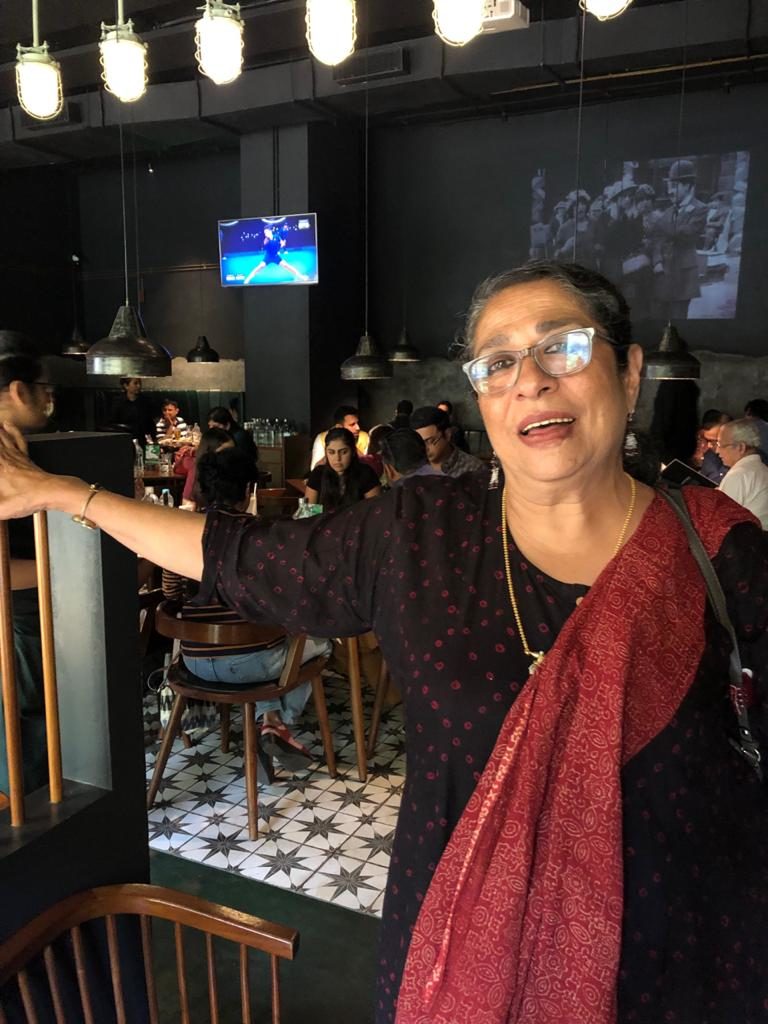 Do you love living all by yourself? How do you spend your day?

I was telling my daughter the other day I will never be alone anywhere in the world. I will find a theatre group and tell them allow me to clean your costumes or dust your shoes. I don’t have to act. You can be the most important person by just ushering, helping backstage, by offering chai to the actor, by allowing a quiet moment to the actor. Everything goes into the performance.

I love to cook, I love to listen to music, I love my garden, flowers, the bees and the birds, I live on a small farm that keeps me busy. I have 75 coconut trees, mango, jack fruit and papaya trees, dogs, and a granddaughter. They live in Singapore and visit me every two months. That gives me space to be on my own and not make anyone a crutch as that I feel is most important for your silver years.

Click here to read about Dolly Thakore who is a theatre actor, broadcaster, newsreader, master of ceremonies and wears many hats and is pulling her silver years with all glamour.