Navigate:
YOU ARE AT:
Silver Talkies»News You Can Use»Trend: How Robot Caregivers Can Help The Elderly 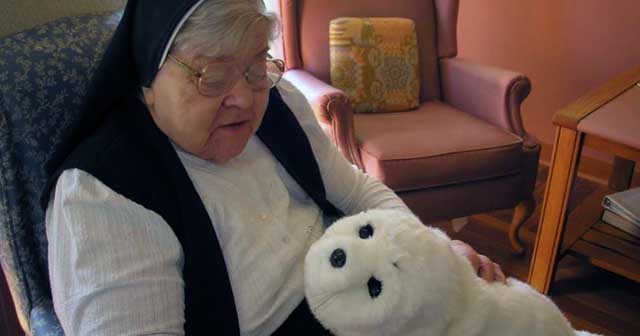 Trend: How Robot Caregivers Can Help The Elderly

Robots caregivers are the latest on the block for elderly and are being used extensively in care homes in Japan, Germany and elsewhere. We take a look at the trend.
Loneliness and social isolation are leading to several ailments among the elderly but a new form of support is gradually emerging. Service bots or robot caregivers are increasingly being used in countries like Japan to help care for elders. Now, a Hong Kong based inventor is also building affordable multi-functional wearable devices for patients and senior citizens to help them regain agility according to a report in South China Morning Post. One of his latest products is a walking aid system targeting patients with Parkinson’s disease.

In Japan, across various care facilities, robots are used for care-giving. According to reports, robot caregivers offer geriatric patients a variety of services that fall, generally, within three categories: serving and fetching, communications and emotional support. In fact, Tokyo’s Shin-tomi nursing home uses 20 different robot models to care for its residents.

VOA news reports that the Japanese government has been funding development of elder care robots to help fill a projected shortfall of 380,000 specialized workers by 2025. While Japan goes the robotic way, the global market for nursing care and disabled aid robots, made up of mostly Japanese manufacturers, is still tiny at just $19.2 million in 2016, according to the International Federation of Robotics.

In India, we seem to be far away from the thought and robot caregivers may even be frowned upon, though loneliness and lack of adequate care remains an issue here too. In fact, according to a report by the NGO, Agewell Foundation, India’s ageing population is struggling with loneliness and every fifth senior citizen in the country is in need of some kind of psychological counselling.

Not everyone is in favour of robot caregivers though. Some think it would remove seniors farther from the human touch. “Social isolation of seniors is a significant concern amongst gerontologists and caregivers alike and robot care, in my mind, would only compound that issue,” says Susan Madlung, gerontologist and Clinical Educator for Regional Programs and Home Health Re-Design at Vancouver Coastal Health, in an article in AgingCare.com.

The question remains whether robots can replace humans when it comes to providing real emotional support to elders. While we in India may still be many years away from employing robot caregivers to look after seniors, here’s a list of robots that have provided/or promise to provide many an elderly person emotional support and the much needed helping hand. Care O Bot: A German manufactured robot, it has been used in a number of German assisted living facilities. It is able to ferry food and drinks to residents from the kitchen as well as keep them entertained by playing memory games to help keep their minds sharp. It is also programmed to behave like the perfect gentleman grandma would easily take to.

Dinsow elder care robot: This one is a personal assistant of sorts and can help elders take their pills, track their health and answer calls from family and doctors. You even get a mini version that can be on your nightstand.

Elliq: Yet to be released, this is an interactive robot with an integrated tablet. It tracks pill regimens and connects elders to family, friends, and medical professionals through video calls and social media. It is also smart enough to check the weather and suggest outdoor activities. It also tries to figure out the users likes and dislikes and suggest activities accordingly.

The Paro: Employed in Japanese nursing homes since 2003, the Paro is a robotic ball of fur designed like a huggable, pet-worthy seal. It’s a therapy robot that responds with lifelike movements to stimuli, recognizes temperature, posture, and light and even responds to praise! Why get a dog when Paro is here!

Buddy: Buddy is a companion robot that can provide seniors social interaction and assistance by hooking them up (with family and friends) on Skype or FaceTime; reminding them of upcoming events and even monitoring the homes of seniors who live alone. It is also designed to detect falls and unusual activities like most robot caregivers.